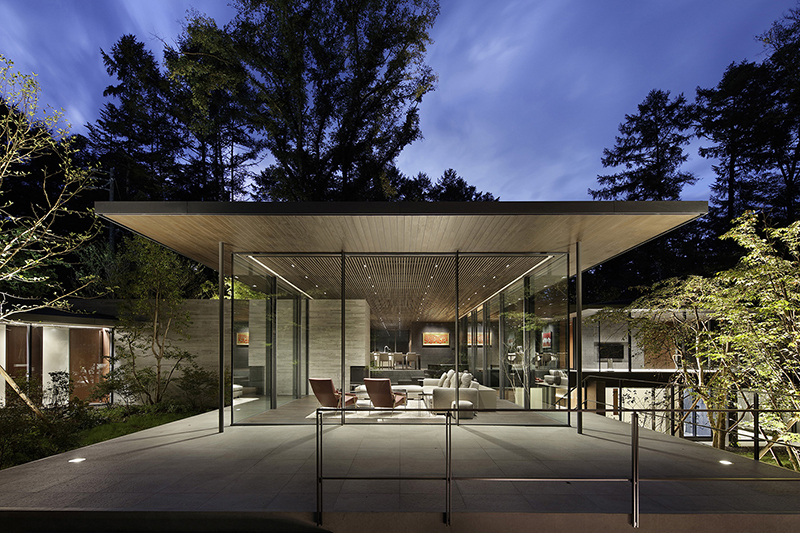 GUESTHOUSE P/k is a recreation facility for a Tokyo-based big owner company, located in an affluent area of Karuizawa.

The irregularly-shaped site of 2500m2 is made up of a lush, green terrain sloping downwards toward a river only 4 meters from a public road. In an effort to preserve its rich landscape, the building employs an inconspicuous design that utilizes the land's topography.

The mountain retreat seeks a harmonic dialogue with its surroundings, highlighting its environment from different perspectives through its transparent walls. The grand living space extends from the interior to the exterior: the elevated kitchen and dining that recedes towards the larger relaxing area, continuing towards the spacious decks and landscaped garden that finally descends into the riverside.

Centralized around the main living area are the master bedroom and guest rooms, each with its own bathrooms. In particular, the main bathroom attached to the master bedroom is framed by windows in three dimensions connecting the exterior landscape to the interior space. Nature is put into conversation with created space in each room, achieving a diverse yet consistent composition toward an architecture open to the landscape.

A series of corten steel walls wrapping around the site serves not only for protecting the privacy inside, but for intermediating between the interior and exterior through the various shaped slits barely noticeable from either side.

Humans should always be humble towards nature. In Japan, where we live and work, people have respected nature since ancient times, and to avoid the wrath of the gods who habit it, people have always been modest in their relationship with nature and have valued their spirituality. This is not because we expect any benefits from nature in return. It is rather to share a little of the rich world of the gods' activities.

When humans build in nature, the act of destroying nature always occurs. We human beings, who are supposed to be a part of nature, should be happy to be able to live with Mother Nature by renting a small part of it, but instead we tend to destroy more than we need, and without realizing it, we take it for granted.

In this project, I wanted to encourage ourselves to reflect on those things we take for granted, to respect the preciousness of the life of even a small tree, and to create a building that could be gently inserted, or rather, slid into the original natural environment. The completed building, here, is one of the results of my attempt to respect nature and pursue a way of being that is rich with nature.

The site is located in Karuizawa, Nagano, a summer resort in the mountains 2.5 hours by car from Tokyo. The city has a history of being developed as a summer retreat by Western missionaries from more than a century ago; today, it is known as one of the most affluent holiday areas in Japan. The climate is relatively wet and rainy, with cool summers and several centimeters of snow in winter (which requires deep eaves).

The irregularly shaped site, stretched longitudinally along the river, is surrounded by a short public road to the north, a narrow private road to the west, and neighboring land to the south. From the public road to the neighborhood, there is a gentle slope with a difference in elevation of about 4 meters along the river. When I first visited this site, I wanted to design the building without damaging the rich nature that thrived there for a long time. This place did not need an ostentatious building that would overpower its surroundings. I wanted to keep the height of the building as low as possible to accentuate the towering trees. I wanted to create an architecture that would give the illusion of living outdoors among trees, even when one is in interior space.

The entrance is located at the end of a human-scale maple tunnel. The moment one opens the opaque, wood-clad door, they are presented with the deep woods beyond. From there, a space of transparency ? surrounded by glass walls ? extends in all directions. In the site, each space is carefully arranged to accommodate the existing trees. Following the topography of the land, the building was designed as a two-storied structure, with guestrooms and a large bath woven into the space. The platform of the kitchen-dining and the salon are separated by an 80-centimeter level to demarcate the respective areas. The platform of the salon continues into the large outdoor terrace, the core of the site. The view from indoors presents an extension from the transparent glass space into the lush greenery of the trees on the site, and beyond.

As an architect whose vision encompasses the whole environment, it is better to design not only architecture but also its landscape as a whole. When on earth did the idea of dividing architecture into indoor and outdoor become common sense? I believe we should no longer think this way. Suppose the environment surrounding us is “common” for humanity. If that is the case, then it would be appropriate for architects to work on buildings that are part of the whole environment, as if they were borrowing a part of it, and quietly allowing themselves to be placed in the space with humility.